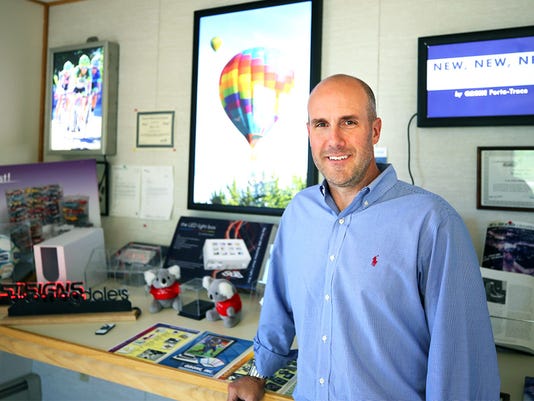 In a humble brown building in Johnson City, you’ll find the leading light box and engineered industrial bellows manufacturer in the United States.

A generational family manufacturing business led by owners Bill Clark, his wife Michelle Clark and mother-in-law Mary Ann Motsko, GAGNE, Inc. was founded in the 1960’s by Tony Gagne with its origins in RF welding, eventually evolving into light box and bellows manufacturing.

“[After years in business], Tony sold the company to my father-in-law and his partner who actually still works here,” said Bill Clark.

“I joined in 2007. My father-in-law got sick around that time, which is why we came here. My wife is originally from Vestal. I’m from Milwaukee and was working in manufacturing in Wisconsin before this. We were going a totally different route before coming here, but our family needed us, so we found ourselves in Broome County,” Clark went on.

Since Bill Clark joined the GAGNE team, the company has been on a mission to refine and perfect its various product offerings and service to customers nationwide.

GAGNE’s renown Porta-Trace light boxes have been sold in art stores, art departments and amongst artists and photographers almost since inception.

“Anyone that’s in the art industry, or that’s used a light box, would know Porta-Trace. We get recognized all the time. People are always saying, “I had one of these growing up!” which is really cool,” said Clark.

Beyond the art industry, Porta-Trace light boxes have been an integral part of various Hollywood hits, such as Silence of the Lambs, Jerry Maguire and a slew of other movies and TV shows in need of that perfect backlighting for a scene.

GAGNE’s custom, specialty product lines cover as wide a range as the industries they’re used in.

Aside from a variety of illuminative products, GAGNE is best known for their bellows manufacturing, or protective covers, used in manufacturing for the medical, military and automotive industries among others. GAGNE, Inc. also offers lines of couplings and fabricated plastic products, which have been used for UPS conveyor belts, plastic display cases and beyond.

High-quality, dependable products aren’t the only thing that sets GAGNE, Inc. apart, however. This Broome-based business is defined by their expert and personalized customer service and hyper-efficient team, the majority of whom have been with GAGNE for more than 20 years.

“When we get customers, we tend to keep them – the same goes for employees. We’ve got people in the front office and on the floor who have been here 45 or 50 years. We have probably 25 people…they’re super efficient and just fantastic at what they do. One of our team members can remember a specific bellow he made 20 years ago for a customer,” said Clark.

Any business’ success comes with its fair share of hardships to overcome though. For GAGNE, those have come in the form of strategizing how to adjust to their aging workforce, as well as rebuilding their light box business, in response to the ever-evolving technological needs these illuminative products serve during the recession.

“When I got here, we were looking at the business and really trying to figure out which direction to focus on – then the recession hit within a year. Trying to reinvent such a big portion of our offerings during a massive recession was tough, but we clawed our way out of it. It’s good today. The economy is good. We’re a pretty good bellwether of the economy since we have customers in almost every major industry,” Bill Clark said.

“We’ve put a lot of energy, design, thought, engineering, money and machinery into our light box and illuminated products/signage business. We’ve become a lot more capable in creating custom light boxes over the years and can now make pretty much any light box you can imagine,” said Clark.

This has been the objective since day one for him.

“Our goal has always been to be able to make any custom light box – really any custom product we offer – that somebody calls us up for and we’re pretty well there, which is a good feeling,” Clark said.

GAGNE, Inc. produces thousands of light boxes annually and tens of thousands of bellows in any given year as well.

After years of strategizing, rebuilding and refining their product lines and processes, Bill Clark and the rest of the GAGNE team are focused on continuing on this trajectory, selling their products and serving their current customer-base as effectively as possible – and enjoying every minute of it.

“It’s been a good ride. [Coming to Broome] took me out of a crazy world of corporate life, airplanes and long hours. My job doesn’t have its lack of stress, but it’s nothing like what I used to do. My job – my life – is much more family-centric now, which is what my wife and I were shooting for all along. I found that here.”

GAGNE, Inc. is part of why #Broomeisgood and the #MadeinBroome program. Learn more about them at gagneinc.com.

Members of the editorial and news staff of the USA Today Network were not involved in the creation of this content.